All eight of my BAI funded Irish radio plays are now available on podcast (click on the links on the right hand side of this page).

With particular thanks to Jim Nolan the director and Eugene Sully, the genius editor.

We had enormous fun and joy making them, I hope you enjoy listening to them!

Set in Brennan’s Bar, a peculiar pub on Waterford’s O’Connell street, Strongbow’s Clock is a comic ghost story concerning a pair of barflies, an immigrant Hungarian barman and the events that ensue when the pub’s clock stops working and a mysterious young woman is swept in the pub door.

Nick and Angela have met at the same time in Brennan’s Bar every evening, for years. They are served by Gabor, a Hungarian who has become ‘more Irish than the Irish themselves’, and who is a keen, if confused orator of Irish history. On this particular evening however, the antics of a Hallowe’en circus in town delays both Nick and Angela’s arrival and interrupts Gabor’s daily ceremony of winding the grandfather clock. The regular flow of events is thus unsettled, jovial banter turns nasty and the exposure of a dark secret looms. Then, the evening takes a further surreal turn with the arrival of a dazed young woman from Ferrybank…

Strongbow’s Clock is a comic ghost story. It is also a study of the consequences when unrequited love is toyed with carelessly, and the violence such passions can stir.

Strongbow’s Clock is directed by acclaimed playwright Jim Nolan and stars leading Irish talent Michael Power, Jenni Ledwell, Ema Lemon and Nick Kavanagh. Strongbow’s Clock was my fourth radio drama and followed Cow, The Daffodil and Cake, also directed by Jim Nolan. My radio work since includes: The Angel of Trafadden, Shellakybooky, The Cat in the Box and Mussels.

Strongbow’s Clock was made with the support of the Broadcasting Authority of Ireland with the television license fee. 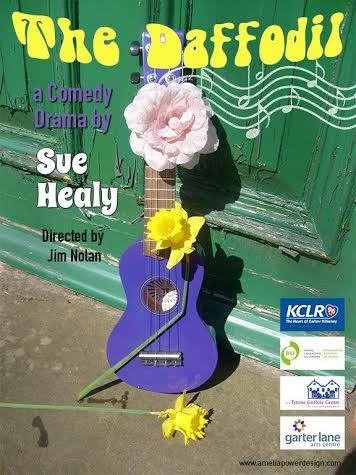 It’s spring, new beginnings, daffodils. In honour of the season that’s in it, I’m reposting a podcast of my 2013 radio drama ‘The Daffodil’.

Set on the fictional Irish island of Trafadden, The Daffodil tells the tale of the relationship between Eurovision wannabe ‘Liam Egan’ and Eurovision hasbeen ‘Banba’, both mired in denial for different reasons.

You can listen to the podcast here

The Cat in the Box: episode 5 MONDAY EVENING

A transvestite pub-owner, his emo daughter, 15 missing cats, an asthmatic punk, a keen teen vlogger in an Irish pub:

Calamity Rain and her cross-dressing father, Feidhlim Phelan, live in a darkened Kilkenny City pub, recently closed down by health and safety officials. They entertain themselves by tormenting unwitting tourists, subjecting them to unpleasant pranks. However, this existence is threatened when Feidhlim beckons an asthmatic middle-aged punk grappling with his own mortality, and Calamity invites along Molly-May Curnihane, a young teen with a vlog dedicated to missing Kilkenny cats. Zany and fast-paced, the series is a surreal comment on contemporary familial relationships and inter-generational dynamics. 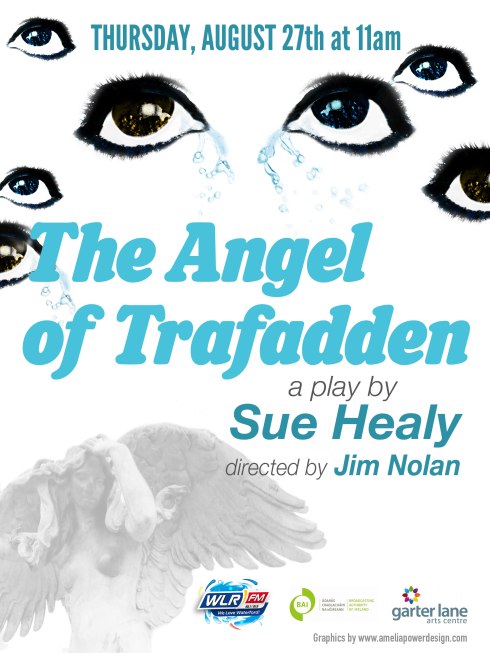 Siobhan, a 38 year old Dublin teacher disenchanted with her dull existence in Portmarnock Primary School opts to chase Internet fame as a vlogger. In this pursuit, she travels to Trafadden Island, Co. Waterford, to vlog the wake of Fabiola, a woman of ill-repute who has apparently died twice. However, Trafadden island’s Mayor Daly is keen to have her focus on his legacy rather than the antics of the rougher elements of the local population. Mayor Daly’s attitude and behaviour at the wake enrages Fabiola’s corpse, chaos ensues and the fable takes a surprising turn…

Written and produced by Sue Healy, The Angel of Trafadden was made with the support of the Broadcasting Authority of Ireland with the television licence fee.PODCAST HERE

Sorry about my silence of late. I’ve been very busy with a number of projects most particularly ‘The Daffodil’ – a radio drama series in five episodes which I wrote, produced and wrapped this weekend in Ireland.
Starring Michael Power and Jenni Ledwell, with Jim Nolan in the director’s chair and Eugene Sully on sound – and musical arrangements by Natasha Purwin and Will Fergusson. It was a blast to make.
Set on the fictional Irish island of Trafadden, The Daffodil tells the tale of the relationship between Eurovision wannabe ‘Liam Egan’ and Eurovision hasbeen ‘Banba’, both mired in denial for different reasons. It’s got laughs (I hope) and music and brio – all of which were brought to the table by a stellar cast and crew.
I don’t have the dates of broadcast yet, but expect it will be in early January 2014. I will let you all know. Promise to get back on top of regular posts very soon.

Due to popular demand…. 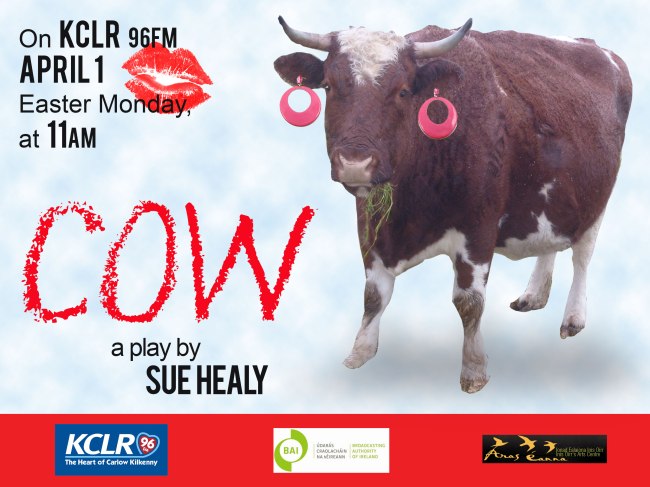 For those who missed it, my radio drama ‘Cow’ will be repeated TONIGHT 2nd April on http://www.kclr96fm.com  @ 7pm (GMT) – click on ‘listen live’ 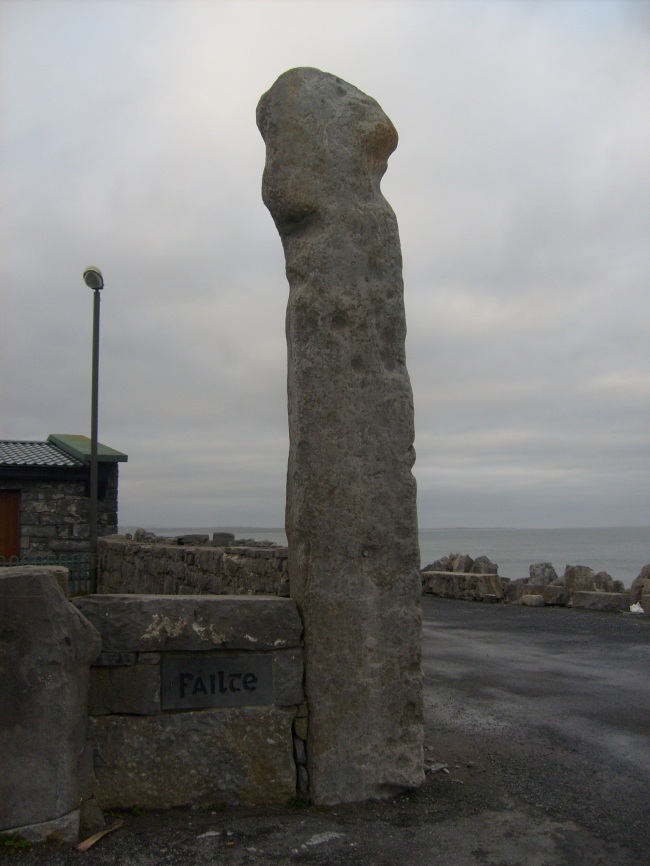 Some have asked if a ‘catch up’ version of ‘Cow’ will be available on the KCLR96fm website. Apparently, yes. KCLR are currently constructing a ‘listening room’ for documentaries and dramas and I’ll let you all know once its up and running – in the meantime, the stations forwarded some lovely feedback this morning – so, I’ve just gotta boast, I mean share…:

“thank you so much for this sensitive, witty, biting and ultimately balanced dialogue between the sexes… Sue Healy’s ‘Cow’ and the women and men bringing into being over the ether were wonderful…especially the wife who paused to say …’calving..’ [given her own delicate situation vis a vis ivf..] when her lovely lump of a man wriggles out of the Wednesday salmon-fest supper to ease him into the bedroom..[lovely touch that] by saying that the heifer is tail up and the wife mumbles the dread-laden word…’calving’…which of course she is not…oh how painful and sweet…i cried …oh God yes i did big tear drops onto my white plate of toast…beautifully realised…this is a play of magnitude, significance, humanity and…redemption… you lucky lucky people…what a fantastic flower you planted, tended, nurtured and ultimately stood backand admired…”

Doesn’t get better than that!

Well, ok, not the mooovies, rather I’m on the radio…

Yep, I’ve got the first broadcast date for my radio drama, ‘Cow’. It will air just after the 11am news (local time in Ireland) on Easter Monday on KCLR 96fm (yes, that’s April 1st – and no, this is not an April Fool’s) – here’s the scoop:

‘Cow’ concerns ‘Agi’, a beautiful Hungarian woman, arrives on Clearys’ farm, Glenmore, Co. Kilkenny, to work as a mushroom picker. The Clearys’ already strained, childless marriage appears under further threat by her presence, however an unlikely friendship develops between Marie Cleary and Agi, leading both women to a new world view.

‘Cow’ is a contemporary radio drama which explores immigration into rural Ireland and the social perceptions of women, both immigrant and native. And, in a light hearted fashion, the play views rural Irish cultural mainstays through the eyes of the bemused foreigner.

To listen, go to kclr96fm.com and click on the listen live button. It may take a minute or two to configure.