The Cat in the Box: episode 5 MONDAY EVENING

A transvestite pub-owner, his emo daughter, 15 missing cats, an asthmatic punk, a keen teen vlogger in an Irish pub: 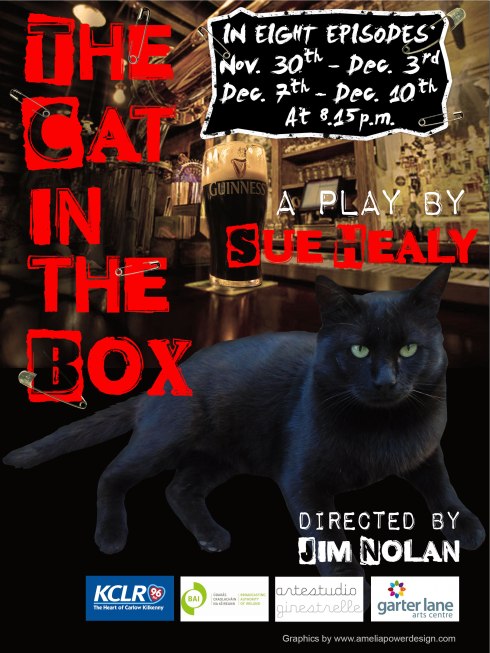 Calamity Rain and her cross-dressing father, Feidhlim Phelan, live in a darkened Kilkenny City pub, recently closed down by health and safety officials. They entertain themselves by tormenting unwitting tourists, subjecting them to unpleasant pranks. However, this existence is threatened when Feidhlim beckons an asthmatic middle-aged punk grappling with his own mortality, and Calamity invites along Molly-May Curnihane, a young teen with a vlog dedicated to missing Kilkenny cats. Zany and fast-paced, the series is a surreal comment on contemporary familial relationships and inter-generational dynamics.

From Ireland, Sue Healy is Literary Manager at the Finborough Theatre, London, a full-time Lecturer in Creative Writing at the University of Lincoln, a Creative Writing tutor at City Lit and the Irish Editor at TheTheatreTimes.com. Sue is an award-winning writer for stage, TV, and prose writer. TV Her current project, a 6x60minute TV series, is under option. She is under commission with Lone Wolf Media, producers behind PBS’ “Mercy Street”, to co-write the pilot and treatment for a six-part TV series. Stage Her most recent stage-play, Imaginationship (2018), enjoyed a sold out, extended run at the Finborough and later showed at the Stephen Joseph Theatre in Scarborough. Her previous stage productions include Cow (Etcetera Theatre, 2017) and Brazen (King’s Head Theatre, 2016), funded by Arts Council England. Sue’s short plays have been performed at the Criterion (Criterion New Writing Showcase), Arcola (The Miniaturists) and Hackney Attic (Fizzy Sherbet Shorts). Radio Her radio work includes nine plays broadcast on BBC Radio 4 (Opening Lines winner), WLRfm and KCLR96fm. Prose Sue has won The Molly Keane Award, HISSAC Prize, Escalator Award, Meridian Prize and has been published in nine literary journals and anthologies including: The Moth, Flight, Tainted Innocence, New Writer, Duality, HISSAC, New European Writers. She has been writer-in-residence on Inis Oírr, Aran Islands, and at the Heinrich Boll Cottage on Achill Island. She has also benefitted from annual artist residencies at the Tyrone Guthrie Centre, and at Ginestrelle, Assisi in Italy. An academic with a PhD in modern theatre history, specifically the Royal Court Theatre, Sue has presented her research internationally. She spent eleven years in Budapest, editing Hungary A.M. She has a PhD in modern theatre history (Royal Court Theatre) and is a UEA Creative Writing MA alumnus. END_OF_DOCUMENT_TOKEN_TO_BE_REPLACED
This entry was posted on Saturday, December 5th, 2015 at 09:13 and tagged with ema lemon, eugene sully, kclr96fm, Michael Quinlan, Niamh McCann, sue healy and posted in Uncategorized. You can follow any responses to this entry through the RSS 2.0 feed.
« The Fall
And So This is Christmas »