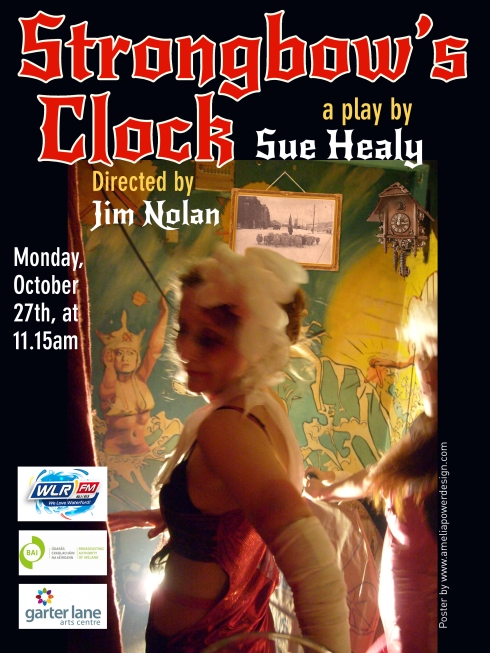 Set in Brennan’s Bar, a peculiar pub on Waterford’s O’Connell street, Strongbow’s Clock is a comic ghost story concerning a pair of barflies, an immigrant Hungarian barman and the events that ensue when the pub’s clock stops working and a mysterious young woman is swept in the pub door.

Nick and Angela have met at the same time in Brennan’s Bar every evening, for years. They are served by Gabor, a Hungarian who has become ‘more Irish than the Irish themselves’, and who is a keen, if confused orator of Irish history. On this particular evening however, the antics of a Hallowe’en circus in town delays both Nick and Angela’s arrival and interrupts Gabor’s daily ceremony of winding the grandfather clock. The regular flow of events is thus unsettled, jovial banter turns nasty and the exposure of a dark secret looms. Then, the evening takes a further surreal turn with the arrival of a dazed young woman from Ferrybank…

Strongbow’s Clock is a comic ghost story. It is also a study of the consequences when unrequited love is toyed with carelessly, and the violence such passions can stir.

Strongbow’s Clock is directed by acclaimed playwright Jim Nolan and stars leading Irish talent Michael Power, Jenni Ledwell, Ema Lemon and Nick Kavanagh. Strongbow’s Clock was my fourth radio drama and followed Cow, The Daffodil and Cake, also directed by Jim Nolan. My radio work since includes: The Angel of Trafadden, Shellakybooky, The Cat in the Box and Mussels.

Strongbow’s Clock was made with the support of the Broadcasting Authority of Ireland with the television license fee.

From Ireland, Sue Healy is Literary Manager at the Finborough Theatre, London, a full-time Lecturer in Creative Writing at the University of Lincoln. Her book on theatre literary management is published by Routledge, December 2022. Sue is an award-winning writer for stage, TV, and prose writer. TV Her current project, a 6x60minute TV series, is under option. She is under commission with Lone Wolf Media, producers behind PBS’ “Mercy Street”, to co-write the pilot and treatment for a six-part TV series. Stage Her most recent stage-play, Imaginationship (2018), enjoyed a sold out, extended run at the Finborough and later showed at the Stephen Joseph Theatre in Scarborough. Her previous stage productions include Cow (Etcetera Theatre, 2017) and Brazen (King’s Head Theatre, 2016), funded by Arts Council England. Sue’s short plays have been performed at the Criterion (Criterion New Writing Showcase), Arcola (The Miniaturists) and Hackney Attic (Fizzy Sherbet Shorts). Radio Her radio work includes nine plays broadcast on BBC Radio 4 (Opening Lines winner), WLRfm and KCLR96fm. Prose Sue has won The Molly Keane Award, HISSAC Prize, Escalator Award, Meridian Prize and has been published in nine literary journals and anthologies including: The Moth, Flight, Tainted Innocence, New Writer, Duality, HISSAC, New European Writers. She has been writer-in-residence on Inis Oírr, Aran Islands, and at the Heinrich Boll Cottage on Achill Island. She has also benefitted from annual artist residencies at the Tyrone Guthrie Centre, and at Ginestrelle, Assisi in Italy. An academic with a PhD in modern theatre history, specifically the Royal Court Theatre, Sue has presented her research internationally. She spent eleven years in Budapest, editing Hungary A.M. She has a PhD in modern theatre history (Royal Court Theatre) and is a UEA Creative Writing MA alumnus. END_OF_DOCUMENT_TOKEN_TO_BE_REPLACED
This entry was posted on Friday, May 27th, 2016 at 10:04 and tagged with ema lemon, eugene sully, ghost story, jenni ledwell, Jim Nolan, Michael Power, nicholas kavanagh, radio drama, Strongbow's Clock, sue healy and posted in Uncategorized. You can follow any responses to this entry through the RSS 2.0 feed.
« Feedback for #BrazenStrap
May Pay Day »

4 responses to “Podcast of Strongbow’s Clock!”