And your point is…? 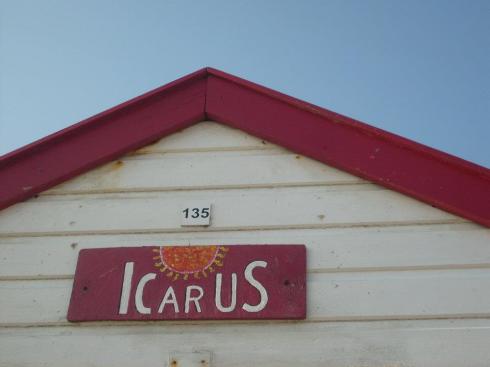 If you fly into the sun…

Theme is the main idea behind a story/poem/song. It is often a universal idea or philosophy. Think of Aesop’s Fables (The Tortoise and the Hare, The Boy Who Cried Wolf). On one level the stories are simple tales that amuse children but they also carry a second, deeper message – a universal truth. This moral is the theme. Such themes are often relevant to everyone, everywhere, in every language, in every culture.

For your writing to be considered ‘art’ you ought to have a theme. Therefore, as well as writing a story whereby Joe wants Natalie, Joe gets Natalie, Joe loses Natalie – you include an underlying message like: “jealousy kills love’.

As you write your story, don’t lose sight of your theme. Some writers use the theme as their title (Jane Austen’s Pride and Prejudice). Though this is not common, nor encouraged, using your theme as a provisional title on your Work In Progress might keep you focused on your message as you are writing. It is also possible that your theme  may become a tagline or catchphrase associated with your story, like “Greed is good” for Wallstreet (albeit in contrary form).

Examples: your theme could be a comment on the role that luck plays in a person’s life, or your belief that all beings are interconnected. Moralistic writers might warn against the seven deadly sins: wrath, greed, sloth, pride, lust, envy and gluttony. Alternatively, a writer may want to say such indulgences make the world go around. Whatever your theme is, it is your “message” or “philosophy” and ought to be consistently evident in your story.

Once you have found your theme, a way of reminding the reader of its centrality to your story is to place symbolic “motifs” throughout your work. That is to say, if your theme is jealousy, and a widely known symbol of jealousy is “green eyes” – you could give your character green eyes and/or have him own a green eyed statue that unnerves him. You might also have a lot of “green” in your story. Thus, green becomes your story’s “motif” and will help to create a sense of unity in the piece.

From Ireland, Sue Healy is Literary Manager at the Finborough Theatre, London, a full-time Lecturer in Creative Writing at the University of Lincoln, a Creative Writing tutor at City Lit and the Irish Editor at TheTheatreTimes.com. Sue is an award-winning writer for stage, TV, and prose writer. TV Her current project, a 6x60minute TV series, is under option. She is under commission with Lone Wolf Media, producers behind PBS’ “Mercy Street”, to co-write the pilot and treatment for a six-part TV series. Stage Her most recent stage-play, Imaginationship (2018), enjoyed a sold out, extended run at the Finborough and later showed at the Stephen Joseph Theatre in Scarborough. Her previous stage productions include Cow (Etcetera Theatre, 2017) and Brazen (King’s Head Theatre, 2016), funded by Arts Council England. Sue’s short plays have been performed at the Criterion (Criterion New Writing Showcase), Arcola (The Miniaturists) and Hackney Attic (Fizzy Sherbet Shorts). Radio Her radio work includes nine plays broadcast on BBC Radio 4 (Opening Lines winner), WLRfm and KCLR96fm. Prose Sue has won The Molly Keane Award, HISSAC Prize, Escalator Award, Meridian Prize and has been published in nine literary journals and anthologies including: The Moth, Flight, Tainted Innocence, New Writer, Duality, HISSAC, New European Writers. She has been writer-in-residence on Inis Oírr, Aran Islands, and at the Heinrich Boll Cottage on Achill Island. She has also benefitted from annual artist residencies at the Tyrone Guthrie Centre, and at Ginestrelle, Assisi in Italy. An academic with a PhD in modern theatre history, specifically the Royal Court Theatre, Sue has presented her research internationally. She spent eleven years in Budapest, editing Hungary A.M. She has a PhD in modern theatre history (Royal Court Theatre) and is a UEA Creative Writing MA alumnus. END_OF_DOCUMENT_TOKEN_TO_BE_REPLACED
This entry was posted on Monday, April 9th, 2018 at 14:00 and tagged with meaning, motif, point, symbol, symbolism, theme, writer, writing and posted in Uncategorized, Writing. You can follow any responses to this entry through the RSS 2.0 feed.
« My Grandma Always Says…
Yes »