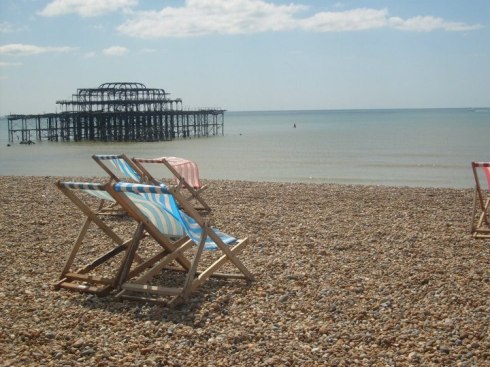 I when I was 22, I wrote seven short stories. They were bad, really pretentious, crammed with adjectives and adverbs and with no theme or character development or point to any of them at all but I thought they were pure genius. I sent them off to every magazine I could find in the bookstore. And waited. And waited. And waited… until I became convinced that they had all been lost in the post. It was the only explanation, surely, as any editor would recognize my genius immediately, no? A couple of months later, I received a single rejection letter. And the truth dawned. No one else even bothered replying. It was 100% rejection. I was floored. I burned the stories I was working on and I didn’t send anything else off for another ten years.

That was very stupid of me. I should have brushed myself off and tried again. I would be in a much better position and be a better writer now if I had. But I wasn’t strong or  mature enough to know that then. Ah, well. During my first year on my MA at UEA, I sent out another batch of stories. I’d had a few shorts published at this stage and was confident that I’d now win every competition going and it would pay my MA tuition. And, again I got nowhere. I was pretty down but I recalled how I’d let rejection defeat me before and vowed it wouldn’t happen again. I sent out more stuff, and then more stuff. And after six months, I won the Mary and Ted O’Regan Award, and then the Annaghmakerrig award and the Molly Keane Award, the HISSAC and the Sussex Playwrights’ and this year I’ve been shortlisted for an international award, published in two anthologies and it looks quite likely that a lot is about to bloom on the drama front for me (though I don’t want to jinx that by talking too soon).

Anyway, the moral is don’t give up – look at how you can improve your rejected story and send it out again. Remember, much depends on what the magazine or the competition judge is looking for at that particular time, it may not be a comment on your writing skills. Do a bit of research, try to find a suitable home and try and try again. You will get there in the end.

From Ireland, Sue Healy is Literary Manager at the Finborough Theatre, London, a Lecturer in Creative Writing and Publishing at the University of Lincoln, a Creative Writing tutor at City Lit and the Irish Editor at TheTheatreTimes.com. She is an award-winning writer and playwright, her most recent play, Imaginationship (2018), enjoyed a sold out, extended run at the Finborough and later showed at the Stephen Joseph Theatre in Scarborough. Her previous stage productions include Cow (Etcetera Theatre, 2017) and Brazen (King’s Head Theatre, 2016), funded by Arts Council England. Her short plays have been performed at the Criterion (Criterion New Writing Showcase), Arcola (The Miniaturists) and Hackney Attic (Fizzy Sherbet Shorts). Her radio work includes nine plays broadcast on BBC Radio 4 (Opening Lines winner), WLRfm and KCLR96fm. Sue’s prose has won The Molly Keane Award, HISSAC Prize, Escalator Award, Meridian Prize and has been published in nine literary journals and anthologies including: The Moth, Flight, Tainted Innocence, New Writer, Duality, HISSAC, New European Writers. She has been writer-in-residence on Inis Oírr, Aran Islands, and at the Heinrich Boll Cottage on Achill Island. She has also benefitted from annual artist residencies at the Tyrone Guthrie Centre, and at Ginestrelle, Assisi in Italy. An academic with a PhD in modern theatre history, specifically the Royal Court Theatre, Sue has presented her research internationally. She spent eleven years in Budapest, editing Hungary A.M. She has a PhD in modern theatre history (Royal Court Theatre) and is a UEA Creative Writing MA alumna. END_OF_DOCUMENT_TOKEN_TO_BE_REPLACED
This entry was posted on Sunday, August 26th, 2012 at 11:05 and tagged with novel, short stories, submitting, writer, writing and posted in Uncategorized, Writing. You can follow any responses to this entry through the RSS 2.0 feed.
« Wonderwall
Time Out »

7 responses to “Try and Try Again”