Silver Linings on a Dark Cloud 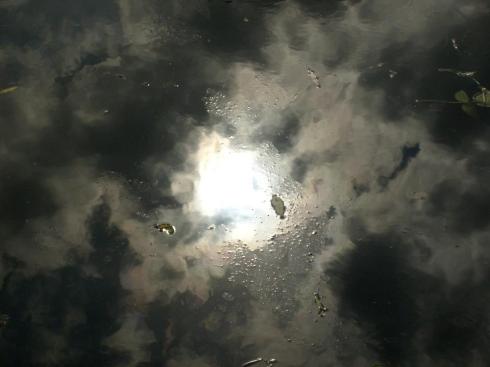 Artists are often asked about gateways to creativity. The answer given will depend on where the artists believe ‘the muse’ doth dwell. Broadly speaking, there are two schools of thought – one holds that creativity is within the artist. The other says art exists outside the creator – in another dimension/world/state.

By now, I have lived and seen too much to say one belief is right or wrong – to do so would be both naive and arrogant. I will state, however, that both philosophies hold that creativity is available to everyone – and access to a heightened creative state can be achieved through various exercises many of which we’ve looked at here before – exercises such as freewrites, morning pages, ‘what ifs’, character studies and even physical exercise and displacement activities. There is another oft- referenced portal to creativity which remains controversial – although it doubtless works for some and that is ‘the black dog’, melancholia, depression.

Our culture is ridden with images of the tortured artistic soul sitting in his garret, slicing his ear off with one hand and producing master pieces with the other. We expect our creative minds to be troubled ones. I would like to write that this is a nonsense, that people can create just as good art in the happy state as they can in depression., but if I am to refer to my personal experience of the creative process, I have to admit that when I’m down I’m at my most creative and productive. And I so wish this were not the case.

Take this year, from January to June of 2012, I felt elated. There were many reasons for this feeling, amongst them a record previous year in terms of writing success, a move from a negative to a positive domestic set up, a new and better job, more free time and an expanding social life. And during this blissful period, I wrote one rather ropey short story.

In the first week of June, my mood fell down the plug hole. Again, there were a number of factors involved including health issues and some financial pressure and perhaps my impending birthday (July 24th) has something to do with it… But ironically, I also went down because I wasn’t writing/producing/moving forward as a writer. Dark thoughts began to wake me in the wee hours, spinning round my head until it is time to get up and face another day soaked in despondency and fear, feeling like I can’t go on.

I’ve in this funk for six weeks now, and during this short time, I’ve written three new short stories and the first draft of a full length stage play. I’ve contacted and set up meetings with directors in three countries re staging or broadcasting an award winning play. I’ve collated and edited all my short stories into a collection and I restarted entering short story competitions. I’m doing this because art is the only thing that doesn’t let me down when I feel wretched.

Art is my friend. I don’t currently have people around me in whom I can truly talk to, or lean on. It is not their fault. Living in Norwich, England, neither city nor country to which I have any ties, I am away from any people with whom I have history, deep friendships and connections. While I’ve made some friends here, one resists leaning on people you know for a relatively short period of time. So, I’m lonely and my feelings are going into my art.

I can’t say if melancholia allows a more direct route to the creativity inside you, or it brings the mind to a near trancelike state where the ‘other world’ can come rolling in. I don’t know. I do know however, that I wish it were not so. And given the choice of living in a positive state or producing art, I’d opt of the happy former everytime. I just wish I knew how to have both. I’m sure it is possible.

Meanwhile, I need to keep writing myself back to happiness…

From Ireland, Sue Healy is Literary Manager at the Finborough Theatre, London, a full-time Lecturer in Creative Writing at the University of Lincoln. Her book on theatre literary management is published by Routledge, December 2022. Sue is an award-winning writer for stage, TV, and prose writer. TV Her current project, a 6x60minute TV series, is under option. She is under commission with Lone Wolf Media, producers behind PBS’ “Mercy Street”, to co-write the pilot and treatment for a six-part TV series. Stage Her most recent stage-play, Imaginationship (2018), enjoyed a sold out, extended run at the Finborough and later showed at the Stephen Joseph Theatre in Scarborough. Her previous stage productions include Cow (Etcetera Theatre, 2017) and Brazen (King’s Head Theatre, 2016), funded by Arts Council England. Sue’s short plays have been performed at the Criterion (Criterion New Writing Showcase), Arcola (The Miniaturists) and Hackney Attic (Fizzy Sherbet Shorts). Radio Her radio work includes nine plays broadcast on BBC Radio 4 (Opening Lines winner), WLRfm and KCLR96fm. Prose Sue has won The Molly Keane Award, HISSAC Prize, Escalator Award, Meridian Prize and has been published in nine literary journals and anthologies including: The Moth, Flight, Tainted Innocence, New Writer, Duality, HISSAC, New European Writers. She has been writer-in-residence on Inis Oírr, Aran Islands, and at the Heinrich Boll Cottage on Achill Island. She has also benefitted from annual artist residencies at the Tyrone Guthrie Centre, and at Ginestrelle, Assisi in Italy. An academic with a PhD in modern theatre history, specifically the Royal Court Theatre, Sue has presented her research internationally. She spent eleven years in Budapest, editing Hungary A.M. She has a PhD in modern theatre history (Royal Court Theatre) and is a UEA Creative Writing MA alumnus. END_OF_DOCUMENT_TOKEN_TO_BE_REPLACED
This entry was posted on Wednesday, July 18th, 2012 at 20:08 and tagged with creative process, depression, melancholia, writing and posted in Uncategorized, Writing. You can follow any responses to this entry through the RSS 2.0 feed.
« Don’t Lose the Plot
Scratch That! »

22 responses to “Silver Linings on a Dark Cloud”