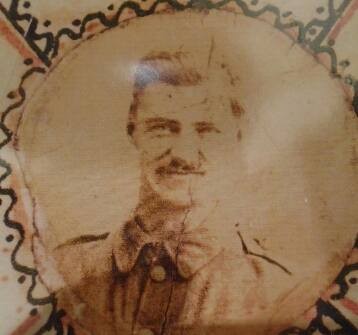 My great-grandfather Lance Corporal Joseph Bohan O’Shea of the Royal Engineers died at the Somme 1916, and is buried at the Quarry Cemetery, Montauban.

My great-grandfather Lance Corporal Joseph Bohan O’Shea fell at the Somme, July 19th, 1916. He’d been in the trenches since war broke out. My grandfather John was four-years-old. Joseph’s death naturally cast a long shadow on my grandfather’s life, and that of his siblings. I wrote a radio play, ‘Cake’, a work of fiction (available to listen to on the right panel) based on events in my great-grandparents’ WWI experience – though it primarily explored the impact of the era on women. Our family has many stories about Joseph, my favourite fact is that he was a fine tenor and at the Christmas truce in 1914, he was elected by his battalion to go to the German trenches and sing for them.

A writer friend of mine who is familiar with my play, was recently researching 1916 newspapers in Ireland and came across an actual letter written from my great-grandmother, Josephine, to the editor of the Waterford News, informing him of her husband’s death in battle (the letter was written from Walthamstow in London, where the family lived for some years before returning to Ireland). Also printed in the paper, were two further letters, one from my great-grandfather’s Major to his Priest and another from a comrade. To mark the centenary, I’m sharing these letters in tribute to my great-grandfather.

But first, I must give some background to Ireland’s relationship with the Great War, which is complicated. The First World War is less of a contentious issue in Ireland now than it used to be, but it ought to be remembered that at the time of WWI, Ireland was revolting against British rule – the Easter Rising took place in 1916, violently challenging British presence in Ireland and changing Ireland forever. In 1918, Irish soldiers who were lucky enough to have survived the trenches of the Somme, came home to an Ireland entering war with Britain (the Anglo-Irish war (1919-1921), followed by a civil war (1922-1923) which was waged over the terms of the treaty. In the shadow of these two home-grown wars, the veterans of 1914-1918 were at best ignored, at worst viewed as traitors for taking the “Saxon Shilling”.

Thankfully, there have been recent moves to acknowledge and remember the more than 200,000 Irishmen who fought with the British forces during WWI. Their reasons for joining up were varied and complex. Certainly, poverty was rife and a soldier’s wage offered steady income. Many others believed that their service would be rewarded by Ireland being granted home-rule. More were convinced by the ‘save small Catholic Belgium from fearsome Protestant invaders’ narrative, which was really pushed in recruitment drives in Ireland. And, at that time, Ireland was part of the UK, so there were some who saw joining up as a patriotic duty. I don’t know my great-grandfather’s own reasons for going to war, and indeed this question was a through line of my play.
However, these men, such as my great-grandfather, should not be forgotten. I would also like to remember here the youngest soldier to die in WWI, 14-year old John Condon, was from my home city, Waterford.

Here are the letters from my great-grandmother, to the “Waterford News” (some words are unclear due to age of paper):

To the editor “Waterford News”

Deceased was a pupil of Mount Sion Schools, and was only 30 years of age. He leaves myself and four little children to mourn his loss. His death is a very heavy blow, as he was one of the kindest and best husbands and fathers. But the burden is light when I know he died such a noble death – in fact a hero’s death. He was killed as he was carrying an officer off the field under heavy fire, and I am sure his death is an honour to the city of Waterford and that he will be deeply regretted by his very numerous friends and companions. He was employed with Sir William Arroll and Co., Bridge Erectors, from the age of 17 years, when he started on the Barrow and then the Suir bridges, and had been on the Blackfriars Bridge, London where he was awarded a medal for a life-saving in 1909. He joined the Royal Engineers in April 1914 and had been through the Battles of Loos and Mons, and in fact, had never been out of danger. He was made Lance-Corporal in May 1916. He was killed on the 19th of July.

I am sending you some of his companions’ letters and also one of his major’s letters to our priest here. I am also enclosing his photo, and would you kindly let me have letters and photo back at your earliest convenience.

Trusting, dear Editor, it’s not imposing too much and thanks you in anticipation,

I remain, yours sincerely,

I was not present when Corporal O’Shea was killed, but it occurred as he was helping to carry one of our officers, who had been wounded in a trench which the enemy was shelling at the time. It was a brave action, because it was done under fire.

Corporal O’Shea had been in the company under my command for nearly two years. He was a quiet man and a good workman, one of many who have sacrificed themselves for the honour of their country. It is owing to the quiet sacrifice of men such as he that we have raised an army which even the Germans now respect, and which contains many individuals such as him, whose quiet heroism has excited the admiration of the nation and their comrades will not be forgetful.

I am glad to think that I was able to let Lnc Corporal O’Shea get home to see his wife and family before the action in which he fell. If I remember right, I was able to help him in this matter on his request.

With sincere gratitude for the prayers you are making for our safety, and I assure you we need them.

It is with feelings of sorrow and deepest sympathy that I now write these few lines to you. I know one of our chaps has written but I feel I must express my sympathy towards you for the loss of your dear husband. We are all sorry to lose him as he was such a good, genuine (Pal) ??? and one of the best men I have ever worked with. I went on my first route march in Bordan with him and I was in the same section until about three months ago. We have shared blankets and parcels from time to time and I can assure you, although I am a single chap, I used to admire Joe for the love he had for his wife and children and few men thought more of home than he did. I went for a (wash/watch)??? to an old post with him the same morning as he passed away that night, but he was doing his duty when he died as he was helping one of our own officers that was badly wounded.

We read it is God’s Word that “No greater love hath no man than that man who lays down his life for his friend.”

My address is Sar. R. Baines, 34th F. T. McCoy. ??? I have his diary that one of our chaps gave to me as it would have been destroyed. So, I will send it along as soon as I have the opportunity. I left a photo he gave me ?? home when I went on leave in May, and if I live through I shall treasure it more carefully and I know someday I shall meet him in a better world. I pray that God may support and sustain you and yours in your hour of sorrow and trial. But Joe was loved by all who knew him and we are all very sorry to lose him, yet we do not know who the next might be, so may God bless you and sustain you. I do not forget you all in my prayers to the One above. With deepest sympathy, I remain your sincere friend.

From Ireland, Sue Healy is Literary Manager at the Finborough Theatre, London, a full-time Lecturer in Creative Writing at the University of Lincoln. Her book on theatre literary management is published by Routledge, December 2022. Sue is an award-winning writer for stage, TV, and prose writer. TV Her current project, a 6x60minute TV series, is under option. She is under commission with Lone Wolf Media, producers behind PBS’ “Mercy Street”, to co-write the pilot and treatment for a six-part TV series. Stage Her most recent stage-play, Imaginationship (2018), enjoyed a sold out, extended run at the Finborough and later showed at the Stephen Joseph Theatre in Scarborough. Her previous stage productions include Cow (Etcetera Theatre, 2017) and Brazen (King’s Head Theatre, 2016), funded by Arts Council England. Sue’s short plays have been performed at the Criterion (Criterion New Writing Showcase), Arcola (The Miniaturists) and Hackney Attic (Fizzy Sherbet Shorts). Radio Her radio work includes nine plays broadcast on BBC Radio 4 (Opening Lines winner), WLRfm and KCLR96fm. Prose Sue has won The Molly Keane Award, HISSAC Prize, Escalator Award, Meridian Prize and has been published in nine literary journals and anthologies including: The Moth, Flight, Tainted Innocence, New Writer, Duality, HISSAC, New European Writers. She has been writer-in-residence on Inis Oírr, Aran Islands, and at the Heinrich Boll Cottage on Achill Island. She has also benefitted from annual artist residencies at the Tyrone Guthrie Centre, and at Ginestrelle, Assisi in Italy. An academic with a PhD in modern theatre history, specifically the Royal Court Theatre, Sue has presented her research internationally. She spent eleven years in Budapest, editing Hungary A.M. She has a PhD in modern theatre history (Royal Court Theatre) and is a UEA Creative Writing MA alumnus. END_OF_DOCUMENT_TOKEN_TO_BE_REPLACED
This entry was posted on Sunday, November 11th, 2018 at 10:58 and tagged with Bohan O’Shea, cake, somme, sue healy, WWI and posted in Uncategorized. You can follow any responses to this entry through the RSS 2.0 feed.
« No Space for Displacement
The Way you Tell ‘em »