The Blue King of Trafadden

Sue Healy’s ninth radio play, The Blue King of Trafadden, is a 45 minute, bi-lingual action-drama concerning a troubled Afro-Caribbean dentist, Henry Ryan, who believes he descends from the last king of a Co. Waterford island, a hero exiled during the Cromwellian invasions. 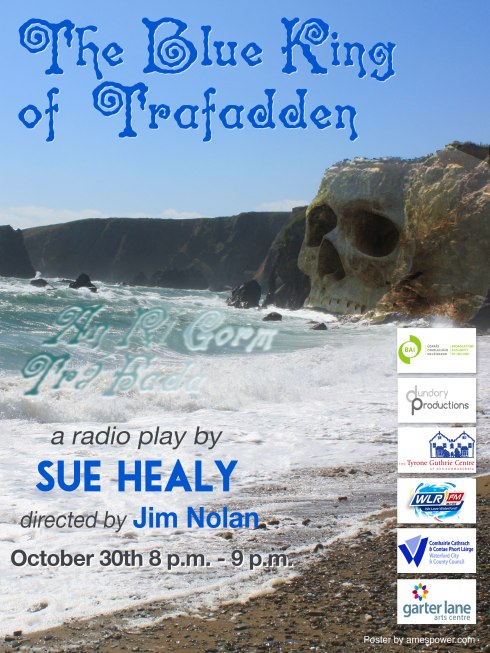 Henry is intent on burying his grandmother’s ashes on this ancestral land, along with his secret drug addiction. Henry lodges with the ferryman Séamus, his partner Eimear and her son, Óg. However, it soon becomes clear that everyone on this island has a secret….

The Blue King of Trafadden was inspired by the little known Irish diaspora on the Caribbean island of Montserrat. Although bi-lingual, the play has been expressly written so as the plot can be easily followed even by those with little Irish.

Sue Healy’s drama credits in 2016 include a comedy at the King’s Head Theatre, funded by Arts Council England (May); and a play workshopped by Dublin’s Abbey Theatre (October). Sue was a finalist for the Eamonn Keane Full-Length Play Award (June), is currently a finalist for the Nick Darke Award and is shortlisted for the Old Vic 12 (both results TBA).

In previous years, Sue’s radio dramas have broadcast on BBC Radio 4, WLRfm, KCLR96fm; she has also won the Sussex Playwrights’ Award, and presented in the Festival of Contemporary European Drama. Sue has had staged readings of her work in theatres in London, Norwich, Brighton and Cornwall.

From Ireland, Sue Healy is Literary Manager at the Finborough Theatre, London, a full-time Lecturer in Creative Writing at the University of Lincoln. Her book on theatre literary management is published by Routledge, December 2022. Sue is an award-winning writer for stage, TV, and prose writer. TV Her current project, a 6x60minute TV series, is under option. She is under commission with Lone Wolf Media, producers behind PBS’ “Mercy Street”, to co-write the pilot and treatment for a six-part TV series. Stage Her most recent stage-play, Imaginationship (2018), enjoyed a sold out, extended run at the Finborough and later showed at the Stephen Joseph Theatre in Scarborough. Her previous stage productions include Cow (Etcetera Theatre, 2017) and Brazen (King’s Head Theatre, 2016), funded by Arts Council England. Sue’s short plays have been performed at the Criterion (Criterion New Writing Showcase), Arcola (The Miniaturists) and Hackney Attic (Fizzy Sherbet Shorts). Radio Her radio work includes nine plays broadcast on BBC Radio 4 (Opening Lines winner), WLRfm and KCLR96fm. Prose Sue has won The Molly Keane Award, HISSAC Prize, Escalator Award, Meridian Prize and has been published in nine literary journals and anthologies including: The Moth, Flight, Tainted Innocence, New Writer, Duality, HISSAC, New European Writers. She has been writer-in-residence on Inis Oírr, Aran Islands, and at the Heinrich Boll Cottage on Achill Island. She has also benefitted from annual artist residencies at the Tyrone Guthrie Centre, and at Ginestrelle, Assisi in Italy. An academic with a PhD in modern theatre history, specifically the Royal Court Theatre, Sue has presented her research internationally. She spent eleven years in Budapest, editing Hungary A.M. She has a PhD in modern theatre history (Royal Court Theatre) and is a UEA Creative Writing MA alumnus. END_OF_DOCUMENT_TOKEN_TO_BE_REPLACED
This entry was posted on Wednesday, October 26th, 2016 at 10:11 and posted in Uncategorized. You can follow any responses to this entry through the RSS 2.0 feed.
« Tune in and Turn on…
1916 Remembered »