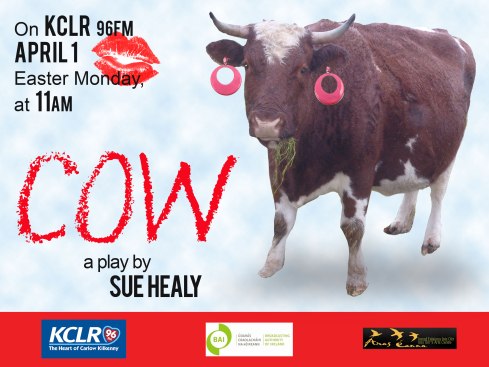 My debut broadcast takes place tomorrow when KCLR 96fm airs ‘Cow’ – a 40 minute radio drama I wrote and produced. ‘Cow’ goes out at 11am Irish time, April 1st, Easter Monday (that’s midday on mainland Europe, 6am New York, 9pm Melbourne) and can be accessed via the KCLR 96fm website, by clicking on the ‘listen live’ button.

Made with the support of the Broadcasting Authority of Ireland, ‘Cow’ tells the story of Agi, a beautiful Hungarian woman with a secret who arrives on Damien and Marie Cleary’s farm in Glenmore to work as a mushroom picker. The Clearys’ already strained, childless marriage appears under further threat by her presence. An unlikely friendship develops between Marie and Agi however, leading both women to a new world view.

In a light hearted fashion, ‘Cow’ views the rural South East through the eyes of a foreigner bemused by cultural mainstays such as hurling and camogie, D.J. Carey, pub culture and the power of Smithwick’s beer. The forty-minute drama also explores contemporary issues such as Eastern European immigration into rural Ireland and social perceptions of women, both immigrant and native.

Do turn on and tune in…

From Ireland, Sue Healy is Literary Manager at the Finborough Theatre, London, a full-time Lecturer in Creative Writing at the University of Lincoln, a Creative Writing tutor at City Lit and the Irish Editor at TheTheatreTimes.com. Sue is an award-winning writer for stage, TV, and prose writer. TV Her current project, a 6x60minute TV series, is under option. She is under commission with Lone Wolf Media, producers behind PBS’ “Mercy Street”, to co-write the pilot and treatment for a six-part TV series. Stage Her most recent stage-play, Imaginationship (2018), enjoyed a sold out, extended run at the Finborough and later showed at the Stephen Joseph Theatre in Scarborough. Her previous stage productions include Cow (Etcetera Theatre, 2017) and Brazen (King’s Head Theatre, 2016), funded by Arts Council England. Sue’s short plays have been performed at the Criterion (Criterion New Writing Showcase), Arcola (The Miniaturists) and Hackney Attic (Fizzy Sherbet Shorts). Radio Her radio work includes nine plays broadcast on BBC Radio 4 (Opening Lines winner), WLRfm and KCLR96fm. Prose Sue has won The Molly Keane Award, HISSAC Prize, Escalator Award, Meridian Prize and has been published in nine literary journals and anthologies including: The Moth, Flight, Tainted Innocence, New Writer, Duality, HISSAC, New European Writers. She has been writer-in-residence on Inis Oírr, Aran Islands, and at the Heinrich Boll Cottage on Achill Island. She has also benefitted from annual artist residencies at the Tyrone Guthrie Centre, and at Ginestrelle, Assisi in Italy. An academic with a PhD in modern theatre history, specifically the Royal Court Theatre, Sue has presented her research internationally. She spent eleven years in Budapest, editing Hungary A.M. She has a PhD in modern theatre history (Royal Court Theatre) and is a UEA Creative Writing MA alumnus. END_OF_DOCUMENT_TOKEN_TO_BE_REPLACED
This entry was posted on Sunday, March 31st, 2013 at 09:15 and posted in Uncategorized. You can follow any responses to this entry through the RSS 2.0 feed.
« Shellaky, shellakybooky, Come Out and Show Your Horns…
From Cow to Wow! »

One response to “How Now…”